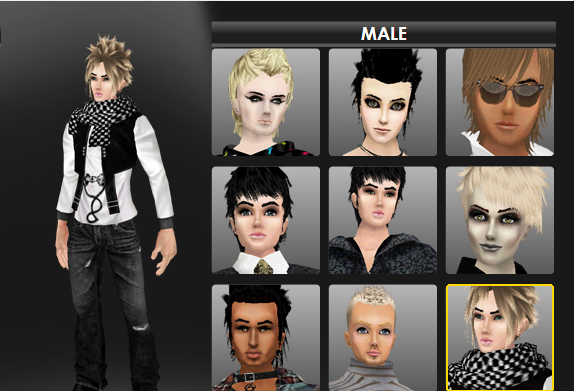 Looking for some great, cool and unique virtual world avatar names? Look no more! Here is our collection of fun avatar names for your virtual character. This list is of masculine avatar names only. If you’re looking for girly names, check out this list.

If you like to play virtual life games or MMOs – you definitely need an awesome avatar name. We searched for ideas all around the internet, and here are the best avatar names that we found. Enjoy!

Ælfheah – is a combination of Old English words ælf  for “elf” and heah  for “high”,  “elf-high”

Aeon Quake – being or life.

Adrastos – named after a Greek legendary King of Argos, meaning “not willing to run away”

Amir – means two words in Arabic, either “prince” or “commander”

Angra Mainyu – he’s known to be the god of destruction, death and darkness in Persian Mythology; Avestan word for “evil spirit”

Anxo – Galician version for Angelus or Angel, a heavenly creature

Bane Kingfinder – a deadly poison and it often refers to death and destruction.

Beowulf – originated from a famous figure in Anglo-Saxon Mythology who fought against monsters and dragons; also means beo for “bee” and wulf for “wolf”

Blood Law – random name that would be cool for vampire or other aweome character.

Cadeyrn – Ancient Celtic and combined Welsh words, cad for “battle” and teyrn for “monarch or king”, meaning “battle king”; the name can also be found as one of the characters in Guild Wars 2 and also a name of a known rugby union footballer, Cadeyrn Neville.

Cadfael – same as Caderyn but this one means “battle prince”, from cad “battle” and fael “prince”

Chavdar – Bulgarian name from 16th century who was known to be the leader of a band of outlaw and protect the people from Ottoman’s injustice, similar to Robin Hood; it was derived from a Persian word that means “dignitary, leader”

Clash Maxim – Scottish origin and it is said to be a nickname for a person with gray hair.

Cloud Demonreaper – a name for someone who lived near an outcrop or hill.

Coinneach – altered to Kenneth;  comes from Gaelic caoin for “handsome”

Daedalus – This name came from the Greek mythology means cunning

Decebal – he was the last king of Dacia and called “the brave one”. That’s why his name means”brave, powerful”

Dieter – pronounced as DEE-ter, derived from Germanic words meaning “warrior of the people”,

Edge Sheol – West Midland name for thos who lived by or on a ridge or hillside.

Eleftherios – is a modern Greek form of Eleutherios  meaning “free”

Erol – is another “brave” name in Turkish

Etzel –  fictional form of Attila the Hun; this was from the German mythology  Nibelungenlied

Fadi – is a male given name meaning “saviour” in Arabic

Faris – is an armored cavalry or “knight” in Arabic

Friedhold – from Germanic words frid  for “peace” and wald  for “rule”, meaning is “peaceful ruler”

Fritjof –  “thief of peace”  based on Old Norse name Friðþjófr , from the combined elements friðr for “peace” and þjófr for “thief”.

Garrick – from Germanic elements ger for “spear” and ric for “power”,  this makes it “spear power”

Girisha – Sanskrit name for “lord of the mountains”

Gotzon – male given name for “angel” in Basque

Grief Hellsong – Northern English and Scottish term for an estate manager or a  steward.

Guntrum – pronounced as GUWNT-rahm; from German terms gund for “war” and hramn “raven”, meaning “war raven” . This was also the name of  a Frankish king from the 6th-century.

Haidar – this is an Arabic term for “lion”

Iapetos – this was a name of a Titan in Greek mythology derived from the word iapto meaning “to pierce, to wound”

Ivaylo – possible from and old Bulgarian term for  “wolf”

Judicaël – name of a Breton king and and he’s also a saint in the 7th century; French version of an Old Breton name Iudicael, from iud meaning “prince, lord” and cael “generous”

Jun – is a Chinese and Korean given name meaning “handsome, talented” combined with “supreme, ruler, army”

Kaneonuskatew – he was known in 19th-century as a chief of Cree; also a Native American term for “one that walks on four claws”

Kgosi – is a title given to a hereditary”chief, king” of a South African or Batswana tribe.

Lachlan – used as a Scottish nickname for those who came from Norway; Norway was called the Lochlann, or “land of the lochs”

Lorcán –  “little fierce one” in Irish

Maël – known in 5th-century as a saint and hermit’s name who lived in Wales; French version of Breton Mael, originally from a Celtic word which means”prince” or  “chief”

Malik – variant spelling for Maalik and Arabic term for the “king”

Midnight Rouge – someone who has a receptive nature and psychic power.

Mirza – is Persian for “prince”

Naphtali – pronounced as NAF-tə-lie; this is Hebrew given name for wrestling

Naranbaatar – is a “sun here” in Mongolian

Nikandros – composed of two Greek words nike “victory” and andros “of a man”, meaning “victory of a man”

Nikomedes – from the Greek terms nike “victory” and medomai “to think”, meaning “to think of victory”

Ogier – variant of Ogyer and Oger, meaning “wealthy or rich warrior” in Teutonic

Ogun – Nigerian given name for “God of war”

Oreb – is “black raven” in Hebrew

Orfeo – Spanish and Italian version of Orpheus; the same as the Greek orphne which means “the darkness of night”

Orhan – from Turkish or meaning “great” and the title khan “leader”

Otieno -Luo or Eastern African for “born at night”

Otway – can be spelled as Otwai; meaning “luck in battle” in Teutonic

Pallaton – or Palleten is another Native American word for “warrior”

Perun – taken from the Slavic mythology’s god of lightning, Perun; and the meaning of this name is “thunder”

Ptolemy – pronounced as TAHL-ə-mee; from the Greek word polemeios which means “warlike” or “aggressive”

Raiden – variant of Rayder; God of Thunder in Japanese

Rand – or Rando is an English given name meaning “warrior”

Ranier – other spelling is Ranyer which means “great army” in English

Sargon – pronounced as SAHR-gawn; based on Sharru-kinu, an Akkadian name which means “true king”; it also means “prince of the sun” in Persian

Seraphim Warlockreaper – it’s an angel like being; fiery or burning.

Sloane – “warrior” in Irish; can also be spelled as Sloan

Tau – this was the name of Rolong’s last ruler in South Africa around the 18th century, name’s meaning is “lion” in Sotho and Tswana

Thaiter – another form of Walter; German and Irish for “powerful warrior”

Tomislav – same name as the first king of Croatia in the 10th century; from two Slavic word tomiti “torture” and slav “glory”

Tredway – is an Old english word for “mighty warrior”

Typhoon Lord – father or the winds.

Ualter – this is called “army ruler” in Irish

Uiseann – can be spelled as Uisean; this is an Irish give name meaning “conqueror”

Valborg – Swedish meaning is “protection from the slaughter”

Varick – can be spelled in various forms like Varyck, Varyk, Varik, Varyc and Varic and it means “sea drifter” in Icelandic

Vasco – pronounced as VASH-koo in Portuguese and BAHS-ko in Spanish; this was taken from the  medieval Spanish name Velasco meaning crow” in Basque

Vercingetorix – read and pronounced as vur-sin-JET-ə-riks in English and wer-keeng-GE-to-reeks in Ancient Roman; take from the combined three Gaulish words –  ver “over, on”, cingeto “warriors, marching men” and rix  for “king”, meaning “king over warriors”

Wanikiya – Lakota given name for “saviour’

Wind Seraph – has many sterling qualities.

Wolfram – based on Germanic words –  wulf “wolf” and hramn “raven”

Xerxes – Persian for a “royal ruler”

Xindel – “protector of mankind” in Hebrew

Xylon – Greek word for those people who “lives in the forest”

Yeong – this means “brave” in Sino-Korean

Yuan – “one of a kind, original” in Chinese

Yves – “knight of the lion” in French

Zale – Greek word for “power of the sea”

Are you confused and can’t come up with a suitable name for your virtual pet? We have gathered around a thousand bizarre and traditional names that would be perfect for your furry, fluffy, scaly or any types of virtual pets that you may have. Abby Abe Abel Abercrombie Abstract Abyss Acorn Adobe Agro Aku Aladdin Albino Alfredo Alize Alpine […]

Looking for some fun, cool and unique virtual world avatar names? Look no more! Here is our collection of good avatar names for your virtual character. This list is of girl avatar names only. If you’re looking for boys names, check out this list. If you like to play virtual life games like IMVU, Second […]

Virtual dating is a lot of fun and offers many times a better experience than actual dating in the real world.  This virtual dating site is hot and you will not want to miss out on the life you could live through Second Life World.  With over 17,000 members and growing each and every day, […]

If you’re looking for good unique avatar names, check out Avatar Names for Girls or Avatar Names for Boys. Here is a list of the funniest avatar names, that we encountered in virtual life games. Some are really silly, some are crazy, plain stupid, or just simply unbelievable! In any case, you will at least […]
Have you seen this one?