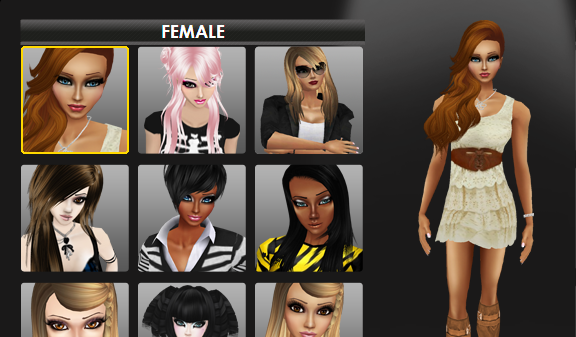 Looking for some fun, cool and unique virtual world avatar names? Look no more! Here is our collection of good avatar names for your virtual character. This list is of girl avatar names only. If you’re looking for boys names, check out this list.

If you like to play virtual life games like IMVU, Second Life, SmallWorlds and others – you definitely need an awesome avatar name. We scouted for ideas all over the internet, and here are the best avatar names that we found. Enjoy!

Ailwynn – variant of old English name Alvin and it means “friend, elf or supernatural being”

Alaia – happy and joyful in Basque

Alisa Nash – a motivator and outgoing

Antoinette Fleming – affectionate and good at getting people to have fun.

Aoife – pronounced as ee-fa; from Gaelic word aoibh meaning “beauty” and there was an Irish legend warrior princess with the same name

Aruzhan – it is known as “beautiful soul” in Kazakh

Bébinn – there are many characters in Irish mythology with this name and in Irish Gaelic, it means “my fair lady”; pronounced as BAY-vin

Betty Bean – likes to be the center of attention.

Blodeuyn – this is “flower” in Welsh

Branwen – popularized by a character from the Second Branch of Mabinogi and she’s known to be the daughter of Llŷr and Penarddun.

Brenaye – people with this name are said to be creative, sensitive and have idealistic qualities

Breeshey – this is Bridget in Manx form which means “exalted one”

Ceinwen – is a Welsh name, derived from two words – cain means “lovely” and gwen for “blessed, fair and white”

Chalchiuhticue – from Toltec Mythology and known as an Aztec goddess of rivers and water. “Jade skirt” in Nahuati.

Cloud Mistyrock – a name for someone who lived near an outcrop or hill.

Clytemenestra – taken from a name of a Greek mythology character who was Agamemnon’s wife during the Trojan war.

Dey Dayfreeze – “dey” is the title given to rulers of the states of Tunis and Tripoli before the French conquest in 1830.

Diantha – from a flower dianthus and means “heavenly flower” in Greek

Dragica – it has a Slavic element dorgu which means “precious”

Dulcibella – medieval spelling was Dowsabel and revived in the 18th century to its Latin form Dulcibella, meaning dulcis for “sweet” and bella for “pretty”

Deirbhile – 6th century saint had this name; Gaelic form is der “daughter” and file “poet”, which makes it “daughter of poet” if you combine the word

Ece – pronounced as e-JE and it means “queen” in Turkish

Ellie Curtis – a person who put the needs of others over their own.

Estiñne – variant of “Esti” which means “honey, sweet” in Basque

Eumelia – is Ancient Greek for “melody”

Fayruz – “turquoise”, a gemstone in Arabic or Persian origin

Fidget Willowfly – named after a pixie who lives near poisonous toadstools in rotting woodlands.

Fioralba – it is a combined Italian word for fiore meaning “flower” and alba for “dawn”.

Freyja – “lady” from Old Norse; goddess  of love and beauty from Norse mythology

Fruitpip Icefly – she brings justice to the wronged and protects the vulnerable.

Funda – Turkish for “heather”, a common name for various plants such as Calluna vulgaris, Erica, Cassiope, and Ericaceae

Funanya – is used in Western Africa, particularly Igbo and it means “love”

Gem Whiteshadow – refers to a gemstone.

Gioia – pronounced as JO-yah which is “joy” in Italian

Ghoncheh  – it is described as a “flower bud” in Persian

Hala – other word for “halo around the moon” in Arabic

Hila – it is called “halo” in Hebrew

Hoshi – is a Japanese word for “star”

Idril – is a character’s name from J.R.R. Tolkien’s book, Silmarillion, a daughter of king of Gondolin; in Sindari it also means “sparkle brilliance”

Ixchel –  goddess of medicine, moon and earth from the Mayan mythology and it also means “rainbow lady”

Izumi – it is “spring or fountain” in Japanese

Jemima – Hebrew for the bird “dove”

Juvela – it is “jewel-like” in Esperanto

Kalysta – derived from Greek name, variant for Calista and a feminine form of Callistus meaning “most beautiful”

Kanani – Hawaiian for “the beauty”

Kandaĵa – it is a sweet Esperanto word meaning “made of candy”

Kaur – it is used as middle name or surname of most female Sikhs; this is “princess” in Punjabi

Kerensa – Cornish for the word “love”

Lale – Turkish and Persian origin (Lalleh or Lalla) for “tulip”

Lana Mcclain – loner, and an observer.

Lara Clarke – familiar with the dark side. Creative and smart.

Laura Stardale – favorable and symbol of victory and honor.

Llewella – feminine form of a Welsh name Llywellyn from the combined name of  the gods Lugus “light” and Belenus “brilliant, bright”

Malai – Thai for “garland of flowers”

Malaika – plural form of “angels” in Arabic, singular is Malak

Malati – named after the flower “jasmine” in Sansrkit

Malina – used in languages like Serbian, Polish and Bulgarian for “raspberry”; pronounced as mah-LEE-nah

Malka – feminine given name in Hebrew for “queen”

Marita – Scandinavian form of Margaret from μαργαριτης  or margarites, a Greek word which means “pearl”

Marjolaine – French for “marjoram”,  a minty-herb undershrub with citrus flavors and sweet pine

Mavourneen – “my darling”, based from the Irish phrase mo mhúirnín

Melusine – from an interesting European folklore of a water fairy who turns into a dirrent form every Satuday; meaning of name unknown

Nayeli – Zapotec for “i love you”

Nephele – “cloudy” in Greek and according to the legend, Nephele was created and shaped like Hera by Zeus.

Nettle Pepperfly – named after a fairy who likes to play tricks on old folk and small children.

Nizhoni – from Native American or Navajo which means “beautiful”

Nkosazana – is “princess” in South American or Xhosa

Océane – pronounced as oh-say-AHN, is a French given name from the word ocean

Olive Willowglitter – this name was taken from a fairy that can only be seen in the light of a shooting star.

Ourania – one of the nine muses in Greek mythology, goddess of astronomy and astrology; variant of Urania; means “heavenly”

Oenone – is known to be a mountain nymph, in Greek mythology, who was first married to Paris of Troy before he left her for Helen of Sparta; meaning is “wine”

Peony – pronounced as PEE-ə-nee; English word for a type of flower with healing powers

Philomel – pronounced as FIL-ə-mel; used in poetry to signify the bird “nightingale”

Prairie Snowsong – plain grassy land or from the flatlands

Primrose – is a rare English given name, it is a type of flower and derived from the Latin word prima rosa meaning “first rose”

Qamar – can be used as a masculine or feminine name, it means “moon” in Arabic

Rain Cornweb – a magical creature that creates bounty and harvest.

Rayla – Black Rayla or White Rayla, a character in The Witcher game

Raine – famous bearer of this name is Raine Spencer, a British socialite in 1929; probably based on the French word reine for “queen”

Sayen – it is called “lovely, sweet” in Mapuche

Seraphina – from a Latin name Seraphinus that originated from Hebrew means “fiery ones” and derived from the biblical word seraphim, an angel with six wings.

Sheelagh – variant of Shiela coming from its root Irish form Cecilia whose named after a legendary martyr and a patron saint of music and musicians.

Sheena Watts – prefers solitude and tends to sit back and observe.

Sheryl Hyde – a planner and a perfectionist.

Talya – “dew from God” in Hebrew

Tess Cottonbelle – it means reap or to harvest.

Tiwlip – this is a modern Welsh name which means “tulip”

Tsubaki – a type of flower called “camellia” in Japanese

Twyla – variant of Twila; probably came from the word twilight or could be from the French word etoile meaning “star”; exact meaning unknown

Uliana – this is the Russian version for Juliana

Uxía – pronounced as oo-SHEE-a; this is Eugenia in Galicia form, whereas Eugenia is a feminine form of Eugenius or Eugene meaning “well born”

Vesela – based on a South Slavic word for vesel meaning “cheerful”

Werknesh – Amharic for “you are gold”

Xochiquetzal – name of a goddess of  flowers, beauty and love from Aztec and Toltec Mythology; in Nahuati it’s called “flower feather”

Ya – same as Xiu, this one also means “elegant” in Chinese

Yaara – Hebrew for “honeysuckle” or “honeycomb”

Yasmeen – other spelling of a Persian name Yasmin from the English word, jasmine, a flower used in making perfume which is also derived from a Persian name yasamen

Yuki –  it’s either 雪 “snow” or 幸 “happiness” in Japanese

Zinnia – originated from the German anatomist and botanist Johann Gottfried Zinn, who named the flower after him.

Ziv – is a name that can be used for both male and female meaning “radiant, bright” in Hebrew

Zvjezdana – pronounced as ZVYEZ-dah-nah;  based on a Croatian word zvijezda meaning “star”

Are you confused and can’t come up with a suitable name for your virtual pet? We have gathered around a thousand bizarre and traditional names that would be perfect for your furry, fluffy, scaly or any types of virtual pets that you may have. Abby Abe Abel Abercrombie Abstract Abyss Acorn Adobe Agro Aku Aladdin Albino Alfredo Alize Alpine […]

Looking for some great, cool and unique virtual world avatar names? Look no more! Here is our collection of fun avatar names for your virtual character. This list is of masculine avatar names only. If you’re looking for girly names, check out this list. If you like to play virtual life games or MMOs – […]

Virtual dating is a lot of fun and offers many times a better experience than actual dating in the real world.  This virtual dating site is hot and you will not want to miss out on the life you could live through Second Life World.  With over 17,000 members and growing each and every day, […]

If you’re looking for good unique avatar names, check out Avatar Names for Girls or Avatar Names for Boys. Here is a list of the funniest avatar names, that we encountered in virtual life games. Some are really silly, some are crazy, plain stupid, or just simply unbelievable! In any case, you will at least […]
Have you seen this one?